Fr. Andy Cravalho was born in Honolulu, Hawaii and grew up in northern California for most of his life before graduating from Mother of Divine Grace homeschooling curriculum in 2001. He graduated from Franciscan University of Steubenville in 2005 with a B.A. in Journalism. After working as a sports journalist in California, Father Andy felt God’s call to the priesthood. He entered the Fathers of Mercy in 2006 and took first vows in August 2007. Fr. Andy received his M.A. in Moral Theology from Holy Apostles Seminary in Cromwell, CT and was ordained to the priesthood on June 2, 2012. After a year serving four parishes in the Archdiocese of Louisville, Fr. Andy was reassigned to the Fathers of Mercy missions. He currently serves as the Novice Master for the Congregation of the Fathers of Mercy.

The Desire for God: Fr. Jean-Baptiste Rauzan and Bl. Teresa of Calcutta, M.C.

December 4, 2013 Culture, Spirituality, Theology
December 5, 2013 The Birthday of Fr. Jean-Baptiste Rauzan, Founder of the Fathers of Mercy By: Fr. A...
Read More

I am a Sinner whom the Lord has looked upon

September 20, 2013 Culture, News, Spirituality, Theology, Vocations 4
With all the discussion centered on what the Pope did or did not say within his interview for Americ...
Read More

May 3, 2015
In this homily, Fr. Andy Cravalho, CPM, explains how God prunes the branches of our soul, so that we...
Read More

February 13, 2015
Fr. Andy preaches about protecting the house of our hearts and our families in light of World Marria...
Read More

November 26, 2014
Fr. Andy gives us some thoughts about how we can give the greatest possible glory the Christ the Kin...
Read More

August 9, 2014
Fr. Andy challenges us to ask the question: do we anticipate Holy Communion with as much zeal as we...
Read More

April 23, 2014
Listen to Fr. Andy Cravalho preach about the night our Lord Jesus Christ gave us Himself in the Euch...
Read More

The Feast of the Holy Family – Fr. Andy Cravalho

December 30, 2013
Fr. Andy Cravalho reminds us that Jesus came to sanctify family life and help us live in our familie...
Read More

December 27, 2013
Fr. Andy Cravalho wishes all a Merry Christmas and reminds us that Christmas is a time to stay awake...
Read More

September 20, 2013
Fr. Andy Cravalho exhorts us to help save souls and nations by carrying our cross valiantly and by m...
Read More

January 2, 2012
Christ our Light - Christ is born, come let us adore Him! Preached in the Chapel of Divine Mercy...
Read More 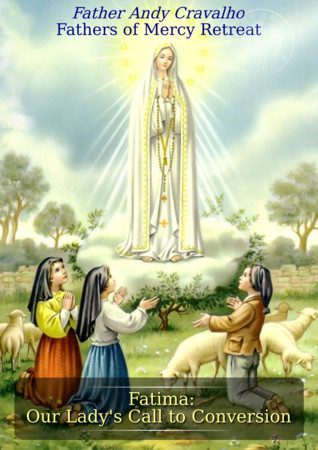 Fatima: Our Lady’s Call to Conversion